NO MORE WORLD CUP IN BRAZIL?

FIFA has told Brazilian government that they will shut down the confederations cup and cancel the entire tournament if the government can not stop the protests going on in the country. 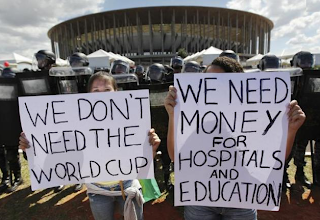 "FIFA is concerned about the safety of FIFA officials and related partners. FIFA requires a guarantee that the securiy of official representatives, comittee members, players, and fans will be maintained. If this can not be offered, FIFA will cancel the WORLD CUP in Brazil.

This puts Dilma under consideral pressure to get something done about the protesters which grew to over 1.2M last night. What the result of this threat will be is unclear, but it is guaranteed that Brazilian authorities are not going to ignore the warning from the international football organization. 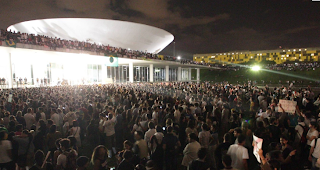 At the same time, some politicians (the governor Alckmin and his crew against the society) claim that in order to reduce the BUS fare, other investments will have to be cut, or, as Alckmin proposed to Hadad (São Paulo`s major) today that:

"He would be willing to resist to the pressure and keep the BUS fare price at R$ 3,20 if so. We will stand still together."

Well, now the BUS fare in São Paulo has gone down to R$3,00 and we don't know what investiments will be harmed. But, if FIFA cancelled the WORLD CUP in Brazil today, would there be more money left to spend with Brazilian people and avoid cuts in investments? Maybe, if you consider the inexistence of:

- THE "BOLSA COPA" FOR POLITICIANS AND INVOLVED MEMBERS;
- THE FREE BUS FOR THE WORLD CUP MEMBERS AND ENTHUSIASTS IN SOME STATES;
- THE INVESTMENTS IN INFRA-STRUCTURE AND MEETINGS FOR ITHE CUP;

Is it a good or bad idea to finish it all?