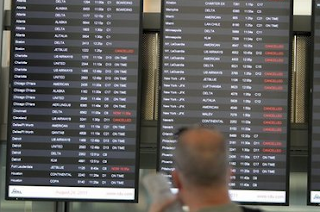 Flight cancellations to the East Coast 1. were depicted Sunday morning on the screens at Dallas/Fort Worth International Airport, but passengers heading to North Carolina, Washington D.C. and Virginia got the all-clear for takeoff in the wake of Hurricane Irene.
About 3 million customers were without 2. power across the Northeast.
But much of the remaining trouble centered on flooding from North Carolina through New England, with homes inundated and roads torn apart by floodwaters. In all, 260 roads were affected, many of them 3. underwater. 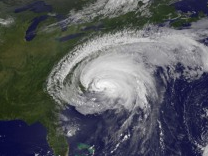 The emergency management headquarters 4. got under water overnight and was evacuated and relocated from Waterbury to Burlington, approximately 20 miles away.
Dunes at Ocracoke's northern end have apparently been spread across the road, so no one yet knows how badly the 5. pavement is damaged.
But life along much of the East Coast was expected to return to normal Monday, as subway services resumed in New York City and the three 6. most important airports in the area were expected to reopen.
Replace the words in bold from the text by the ones from the yellow box below:
major - were flooded - electricity - popped up – submerged – concrete
Answers: 1. popped up; 2. electricity; 3. submerged; 4. were flooded; 5. concrete; 6. major
Postado por Air English School às 8/29/2011 06:08:00 AM