Pilots, forget the paper manuals, iPad is glad to meet you! 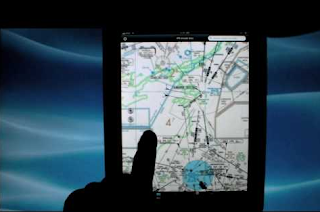 Order the paragraphs correctly:
A-Jim Freeman, who works both as a pilot and the director of flight standards at Alaska Airlines said "the iPad allows pilots to quickly and nimbly access information," adding that "when you need to a make a decision in the cockpit, three to four minutes fumbling with paper is an eternity."
B-The new e-manuals on the iPad are also much easier to maneuver than before as a result of the added hyperlinks and color graphics, while updating the manuals is also a far simpler process. Instead of substituting old pages for new pages, the manual is updated automatically.
C-While they are not currently using the iPad for cockpit charts, the Apple Insider reports that the FAA has authorized commercial and charter airlines to replace cumbersome 40-pound paper manuals with iPads, which will instead serve as so-called electronic flight bags for pilots.
D-Customarily, an aircraft cockpit would contain a collection of paper flight manuals typically weighing around forty pounds, that encompass everything from log books to the operating manual. However, with the latest FAA authorization, they could all be replaced by a one and a half pound iPad.
E-The first carrier to gain such approval was Alaska Airlines back in May. Their pilots were given permission to use the iPad to consult digital flight, systems and performance manuals. The move cut around 25 pounds of paper for each flight bag.
Answers: C, D, E, A and B.
Postado por Air English School às 7/25/2011 10:27:00 AM