Is It Really Necessary?

Fill the spaces below with fortunately, unfortunately and eventually:

John Brennan was around 50 years old and decided to strip naked in protest at the security search in Portland. 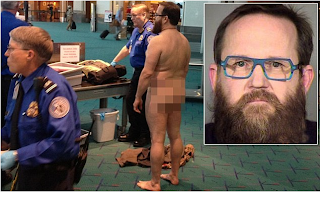 He was arrested for removing his clothes at Oregon’s biggest airport. a.____, he missed his flight but not his clothes (I have seen better shapes), b.____.

This happened a week after a woman took her clothes off at Dever airport for no reason. c.____, she might have been a playboy girl, and I guess we all missed that one shot!