I understand you speak a little English, right?

Viktor Navorski (Tom Hanks) arrives at JFK International Airport, but finds that he is not allowed to enter the United States. While he was en route to the US, a revolution was started in his home nation of Krakozhia. Due to the civil war, the United States no longer recognizes Krakozhia as a sovereign nation and denies Viktor's entrance to the US. Unable to leave the airport or return to Krakozhia, Viktor instead lives in the terminal, carrying his luggage and a mysterious Planters peanut can. 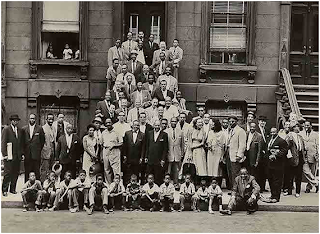 This is the picture, "A great day in Harlem", which Viktor (Tom Hanks) carried around with himself, for love for his father, keeping it inside of the Planters`peannut can, in order to collect Benny Golson`s autograph on a trip to New York. Benny Golson, is one of the Jazz players depicted on the picture, whose autograph was missing from Viktor`s father`s collection.

Watch this movie clip and think about the questions below:


1) Do you think Viktor would be able to get through immigration in the first moment? Why?

2) Why are the Chinese tourists suspicious?

3) What`s going on in Krakhozia?

7) Where is Viktor allowed to stay?

8) Could you speak English better than Viktor?