A "blue moon" is used colloquially to mean "a rare event", reflected in the phrase "once in a blue moon".

It is also a rare statistical event which occurs when a full moon occurs twice in a calendar month. 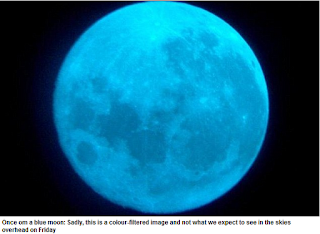 And if you live in England, today is the day, when for the first time in two years we will be treated to our second full moon in August, thanks to the moon last reaching its peak on August 2.

The reason why we call it a 'blue moon' is lost to history, although the Farmers' Almanac would always note an occurrence during the 18th century.

With a full moon occurring once every 29 days, and a month topping out with a maximum of 31 days, the combination is a rare one - occurring around once every two-and-a-half years.

Sadly, we cannot expect the moon to take on a different color. Barring volcanic eruption, it will remain as white as ever, unless clouds obscure the view.

If a volcano does erupt, then all bets are off, as ash in the sky has been known to play visual tricks with the sun and the moon.

When Krakatoa erupted in Indonesia in 1883 - where ash went right into the upper echelons of the atmosphere, blue moons were reported around the world, for up to two years.

Krakatoa's ash is the reason. Some of the ash-clouds were filled with particles about 1 micron (one millionth of a meter) wide - the right size to strongly scatter red light, while allowing other colors to pass.

According to Nasa, The key to a blue moon is having in the air lots of particles slightly wider than the wavelength of red light (0.7 micron) - and no other sizes present. This is rare, but volcanoes sometimes spit out such clouds, as do forest fires.


"Blue Moon" is a classic popular song. It was written by Richard Rodgers and Lorenz Hart in 1934, and has become a standard ballad.

You saw me standing alone

Without a dream in my heart

Without a love of my own

You know just what I was there for

You heard me saying a prayer for

Someone I really could care for

And then there suddenly appeared before me

The only one my arms will hold

I heard somebody whisper please adore me

And when I looked to the Moon it turned to gold

Without a dream in my heart

Without a love of my own