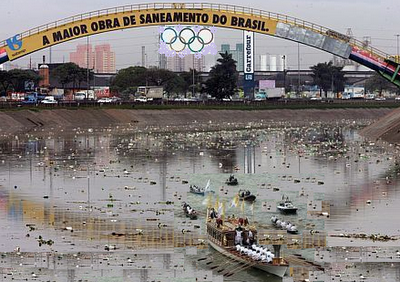 Now, it`s a good opportunity for Brazil to learn with London how to do a good job when Olympics come in 2016.

-       Is it better to have overcrowds or empty seats in Olympics venues?
-       Are we going to have huge traffic jams or we’ll be able to organize or roads and air traffic?
-       Is Brazil going to be dirty or people will learn how to take care of the planet?
-       Are politicians going to act more than they speak, or they’ll keep on being fallacious?

This is what`s going on in the Olympics of London:

“Olympics venues are stuffed to the gunnels with sports fans, London 2012 chairman Lord Coe said amid a row over empty seats.”

He spoke that after hundreds of seats were left unfilled on Saturday and Sunday morning at events including swimming, rowing, tennis and basketball.

"I don't think you will be seeing this as an issue, long-term through the Games," he said.

Well, we hope he’s not being fallacious…


What is the meaning of stuffed to the gunnels?

The word "gunnel" is a phonetic respelling of the word "gunwale," which is a nautical term that refers to the topmost edge of the side of boat. The phrase "stuffed to the gunwales" means much the same as "filled to the brim".