Is there a pilot on board? 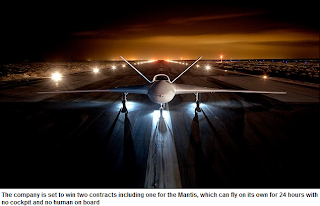 Pilotless planes have taken one step closer to reality after BAE systems revealed it will test a new fighter jet next year.
The company is set to win two contracts including one for the Mantis, which can fly on its own for 24 hours with no cockpit and no human on board.
If all goes as planned the artificial intelligence could mean the end of fighter pilots in the UK and bring down the curtain on conventional aircraft like the F-35.
BAE even claims that the technology could one day be used to pilot commercial jets in a similar way to driverless trains now.
According to BAE systems it will have an ‘electronic eye’, or cockpit mounted camera, so that a flight test observer and a supervisor can watch what is happening on the ground on computers.
Postado por Air English School às 6/30/2012 03:43:00 PM