Fill in the blanks from the text with the appropriate words from the pink box: 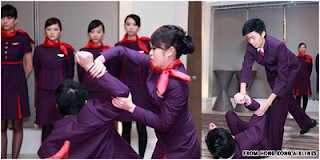 Hong Kong Airlines cabin crew demonstrating why it's a (a)______ idea to fasten your safety belt when you're told to do so.


Hong Kong Airlines is teaching its cabin crew kung fu so they can deal with (b)_______ passengers, the South China Morning Post reported yesterday.

The airline has ordered its 23 new cabin crew to master wing chun - a form of kung fu practiced by martial arts legends Bruce Lee and Ip Man -- which is characterized by (c)_______ movements and close-range combat.

While the prospect of female flight attendants learning kung fu moves may seem like pure fantasy, the training proved (d)______ in a difficult situation on a recent flight from Beijing to Hong Kong.

"One of the passengers was (e)______ but he was probably drunk and felt (f)_______ -- the crew member attended to him and she realised her fitness was helping her especially because the guy was quite heavy," Chan told South China Morning Post.

"Normally, a female cabin crew can't handle a fat guy, especially if he's (g)_______, but because of the training, she can handle it quite easily."

Katherine Cheung, one of the kung fu instructors, said wing chun is well-suited for cabin crew as it can be performed in small, (h)__________ places.

Lumpy Tang, a 22-year-old flight attendant trainee, said wing chun is good for her job because it is fast and "you cannot predict what will happen on the plane."

Chan reportedly said that on average cabin crew have to deal with (i)_______ passengers three times a week.