No culture for hot dogs, we’ve got favelas and emotions! 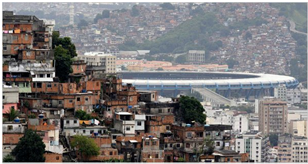 Sergio Moraes/Reuters
Fill in the blanks below with the corresponding passive verbs from the yelow box:

Generations of Brazilians grew up in the Estádio Jornalista Mário Filho, known around the world as the Maracanã. It (a)_______ for the 1950 World Cup and at the time the largest stadium in the world. Now, it (b)________an instant national landmark, a symbol of Brazil’s soccer-centric culture.

“The culture of Brazilian football isn’t just one of going to the game and having a hot dog and a beer,” he said. “It’s active participation in what is a fundamental element of Rio’s culture.”

The stadium, which (c)________ to host the 2014 World Cup opener and final, (d)_________ by hills and favelas, the city’s notoriously poor slums. Far above, from behind the iconic statue of Christ the Redeemer, the distant Maracanã looks like a still birdbath amid the pulsing metropolis. 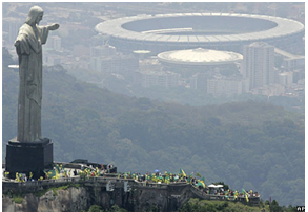 At another Rio stadium, the Engenhão, large bamboo poles wave 10-foot-tall flags just inches over the heads of fans in the section of seats behind the goal. Drums (e)________, songs (f)_________ and fans run up and down the stairs of the stadium expressing their emotions every little second. Welcome to Brazil, the country of emotions!