Could Brazil's soccer image be damaged (or it already is)?

According to CNN, "with Brazil preparing to host next year's World Cup, correspondents say football authorities are becoming more aware that the fans' attitude can damage the country's image.".


Some fans go to matches with flags depicting controversial figures such as Ayatollah Khomeini, Saddam Hussein and Osama bin Laden in the colours of their clubs.

In a statement, the club says the initiative glorifies terrorism.

As we all Brazilians know, "terrorism" (violence) has always  happend in the country either from civilians (organized team supporters) or the police. 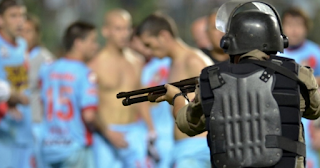